Everyone has heard about the great violin maker Stradivari, even people who have no idea that music is divided into classical and everything else. For those who understand “high matters”, his name is the personification of unsurpassed quality. It is widely believed that the special sound of Stradivarius instruments cannot be confused with anything else.

For several centuries, musicians, violin makers, engineers, and scientists have tried to uncover the secret of the great Italian, but they could not do it. Let’s find out what makes Stradivarius instruments stand out and why they are so difficult to recreate. Naturally, according to scientists who have studied these issues. 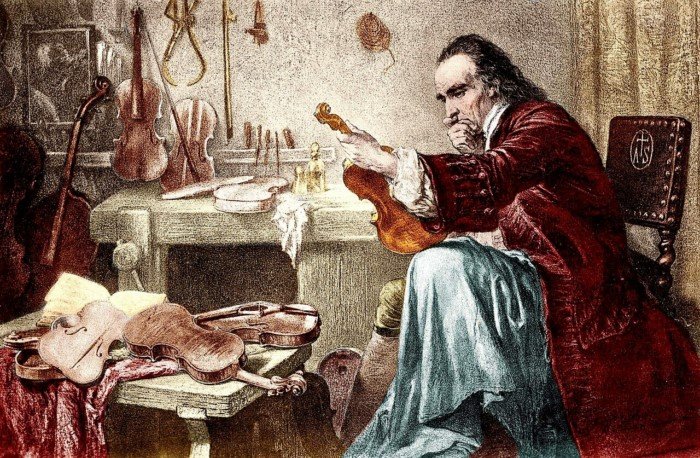 Antonio Stradivari (1644-1737) lived in the city of Cremona in northern Italy. It is believed that there are currently approximately 650 handcrafted instruments in the world. All of them are of great value and are in demand among the best violinists on the planet.

Let’s start with a story about how the violin gets its sound. She has four strings, which are tightly clamped with pegs at one end and a headpiece at the other. The sounding part of them extends from the nut to the stand – these two parts transmit the vibrations caused by the bow to the body. It is at this moment that the violin receives its characteristic sound.

The body and the air can vibrate at the same frequency — for example, 440 times per second, producing the note “A”. However, not all parts of the instrument generate the same vibration. Individual parts vibrate multiple times more often, for example, 880 or 1320 times per second. These sounds are called overtones (harmonics). The shape of the housing and the material from which it is made have the most direct effect on these secondary and tertiary vibrations, amplifying some and damping others at the same time. 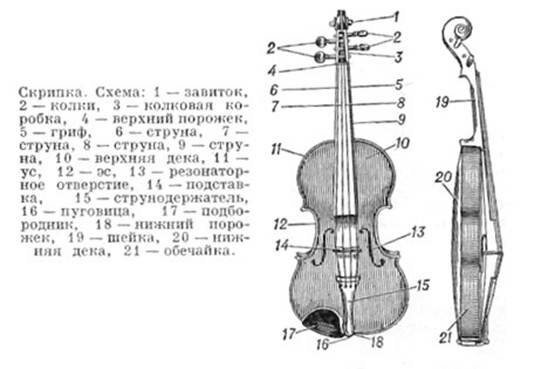 In addition, the shape and material affect the resonance of the instrument. The body of a violin, like any other object, vibrates “more willingly” at certain frequencies than at others. If at this moment there is a coincidence with the frequency of vibration of the strings, resonance occurs.

The unique sound of a violin is, in fact, determined by the unique ratio of overtones and resonances that it produces in its frequency range.

Researchers trying to uncover the secret of the sound of Stradivarius violins have mapped their vibrations using 3D scans, but have found nothing outstanding. However, the binding of this secret to the shape of the instruments initially looked somewhat doomed, since the Italian master did not adhere to any one template and gave his masterpieces different outlines.

Could it be the matter than in the material?

Violin cases are made from several types of wood. The back and sides are usually maples, while the tops are usually spruce. At the same time, not all wood is suitable for violins. It needs to be tough and strong to withstand the tension on the strings, but still have the elasticity needed to vibrate. 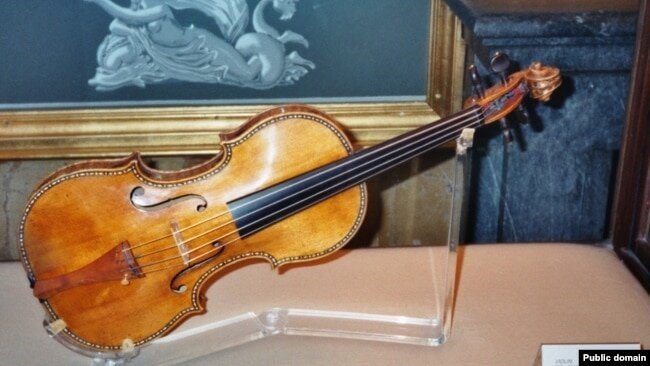 Stradivarius violin on display at the Royal Palace in Madrid.

It is known that Stradivari preferred to use alpine spruce. This tree grows slowly, which is why it has very straight and dense fibers. Thanks to this structure, the material is durable, lightweight and elastic. This is exactly what violin makers require.

In addition, Stradivari fell to live during the so-called “Little Ice Age”, and in its coldest, third phase. The growth of trees at this time slowed down significantly, because of which the quality of the material became even better.

A group of Swiss scientists tried to obtain wood of the same quality using fungi. These organisms have changed the structure of spruce and maple, “eating” the extra part of the cells in the thick layers of wood. Later, this material was used to make instruments that received the pompous name of “biotechnological Stradivarius violins.” Experts and connoisseurs of music have noted their great sound. Some even expressed their opinion that they are in no way inferior to the creations of the Italian master.

There is also a hypothesis that the special sound of the Stradivari violin was obtained through the treatment of wood with salts and smoke.Chemical
analysis shows the presence of anomalies in the material, but due to the fact that the master did not leave records describing his technology, no one can say how and for what purpose these changes were caused. 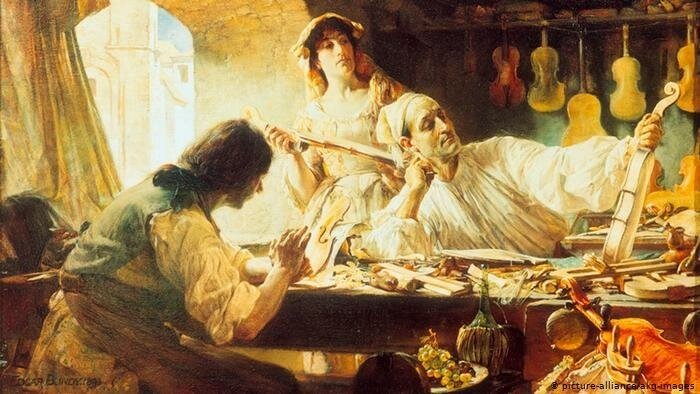 In the studio of Antonio Stradivari. Painting by Edgar Bundy, 1893

Scientists trying to uncover the secret of the Italian genius from this direction are forced to “wind back time” on the basis of the modern chemical composition of violin wood. So, for example, after analyzing the maple of three Stradivarius instruments, they found not only normal age-related changes, but also an increased content of aluminum, calcium and copper. Which directly hints at some kind of special treatment.

It is impossible not to mention the theory that Stradivarius violins sound in a special way due to their venerable age.
It assumes that the tree, inexorably drying out, changes its most important characteristics. It vibrates longer, generating a damping effect. However, a powerful counterargument here is that instruments made by Stradivari’s competitors, in particular Giuseppe Guarneri, have survived to this day. They were created by great craftsmen and at exactly the same time, but they are considered to sound differently.

What is the result?
The following is surely known: Stradivari created magnificent violins using only the best materials and, possibly, some secret chemical ingredients. It is possible that his instruments begin to sound differently with age. In the most general terms, this, in principle, is all that science can say. Rather, its exact branches. But perhaps the answer should be sought elsewhere? For example, in the field of psychology?

In 2017, experts conducted double-blind tests. During the experiments, neither the musicians nor the audience who enjoyed their playing knew which instrument, modern or made by the hand of Stradivari, is used in this or that case. As a result, it turned out that none of the subjects could reliably and reliably determine which violin he had just heard – old or modern.

Most of the participants in the experiment generally gave preference to the sound of instruments made in our hectic days. This means that the Stradivari’s secret may have an exclusively psychological basis.

When a violinist knows that he is holding something unique, of great historical and cultural value, passed down from generation to generation, which has been in the hands of the greatest musicians of all times and peoples, he probably plays in a special way. The viewer, observing this person, the inspiration that is read on his face, the facial expressions that convey all the importance of the moment, becomes infected with emotions floating in the air, and also begins to perceive the sounding music differently.

There is no need to go far for examples confirming the validity of this hypothesis. It is known that expensive wine seems to people more delicious and refined, although in fact it is not.