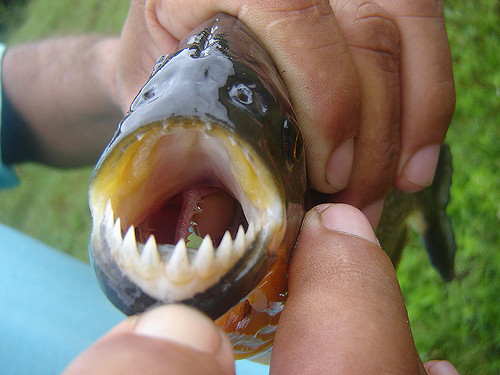 If we were to conduct a poll on which fish are the most dangerous on Earth, the piranha would definitely be in the top three. Despite the rather small size of the fish itself, a pack of piranhas in a matter of minutes will leave only a skeleton from a person caught in the water. At least that’s what happens in many horror movies and horror books. But is it really so?

First it is necessary to understand whether the piranha is really an extremely aggressive creature, which attacks everything that moves in the water. It may sound unexpected, but piranha is a very cautious fish and poses no danger to humans. There are many testimonies when a person swam in piranha-infested water without any harm to his health. This was fully demonstrated by Herbert Axeldorf, a famous biologist specializing in the study of tropical fish. To prove the safety of piranhas for humans, Herbert filled a small pool with piranhas and dove into it, leaving only his swimming trunks on. After swimming for some time among the predatory fish and without any harm to his health, Herbert took the fresh blood-soaked meat in his hand and continued to swim with it. But several dozen piranhas in the pool still did not approach the man, although not long ago they were happily eating the same meat when no one was in the pool.

Piranhas, considered fearsome predators with an irrepressible thirst for fresh flesh, are actually quite timid fish, not daring to approach large creatures.

It is known that piranhas prefer to keep in large flocks, and if one piranha is seen in the water, others are sure to be present nearby. But piranhas do this not because it is easier for a pack of predatory fish to kill a person entering the water, but because piranhas themselves are a link in the food chain for other larger fish species. Being in a pack of dozens of specimens, the chance that you will be eaten is quite low.

Moreover, experiments with piranhas have shown that when alone, these fish do not feel as calm as if they were surrounded by other fish.

But despite their peaceful behavior toward humans, piranhas are veritable killing machines for other fish species that stand below them in the food chain. Their powerful jaws are designed to bite and tear, and their dense, muscular bodies are capable of incredibly fast movements and jerks underwater. It is believed that piranhas have the highest compression force of their jaw muscles relative to their body size compared to any other vertebrate in the world. For example, a common piranha can easily bite an adult’s finger.

But there is not a single documented case of a piranha fatally attacking a human being. But this does not mean that these fish never bite a person or animal entering the water. And such behavior is almost always due not to aggressive behavior of the fish, but to self-defense or abnormal weather conditions, due to which the behavior of piranhas begins to differ sharply from the usual. Abnormal weather conditions refers to a period of drought when rivers inhabited by piranhas dry up, and in the hollows filled with water, but cut off from the main channel, there are many fish deprived of food. The starving predators gradually begin to eat themselves and may well lash out at any creature that comes close to the water. Sometimes the propensity to aggressive behavior of piranhas is recorded during the spawning period, when they throw themselves at a person or animal as a self-defense, but such cases are extremely rare. And of course there is no question of a collective attack of piranhas on people.

But all of the above does not mean that piranhas will refuse to eat human meat. Unfortunately, sometimes in the water tragic cases happen – people or animals drown. Already breathless body floating in the water lures many fish, including piranhas, which leave specific bites on it. People who see this think that the cause of death was a piranha attack – this is how most myths about swarms of piranhas attacking people or animals are born.

It’s interesting: let’s suppose that some unknown way a huge pack of 400-500 piranhas managed to get mad, and now they are attacking everyone who is in the water. For example, if this unfortunate person is an adult, 500 piranhas can eat him to the bone in 5 minutes!